So, we’re just three weeks and three episodes into the new Bud Fallbrook Talk Show on our youtube channel. Keeping in mind that we’re resurrecting an idea that started as a regular cartoon that later died in ‘Development Hell’ and we’re basically starting over from zero (and with, as always, basically, a zero budget) I would say things are going well so far.

We’re trying to determine if it is even sustainable to create and post new animation every Monday, given all the other things we’re trying to do – including earning a living out in the world. So far, it has been doable, and most importantly: it has been fun. Seriously, there is no other reason/motivation that could possibly make you, me or anyone put this much time/effort into any project that has no definite ‘pay-off’ in the endgame. I like “making TV” and I like messing around with software to see what it can do… so as an “artist” that is reason enough to keep going.

Of course, you do want to “find an audience” for your work – no matter what medium/media it might be in and so far things are admittedly slow to launch.

Not many people would let these stats be ‘public’ – never mind reposting and calling attention to them – but here at BluntFarce the only thing we value even more than radical creativity is honesty. Soooo… so far we seem to be halving our audience with every new episode. Clearly, this isn’t the direction anyone wants their audience numbers to go -LOL- but that is where we’re at right now. – and that is OK. What is becoming clear is that “Getting the word out” ie: the dreaded concept of “marketing” is something that’ll take as much time and effort as making the thing itself. That’s the reality. So far, all we’ve done is send out a few tweets and put up a new post on the Bud Fallbrook Show Facebook page. It isn’t enough.

Ever onward. Keep up the good work everyone. 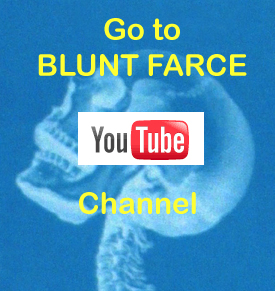